What Happens When We Are Outperformed By Machines? 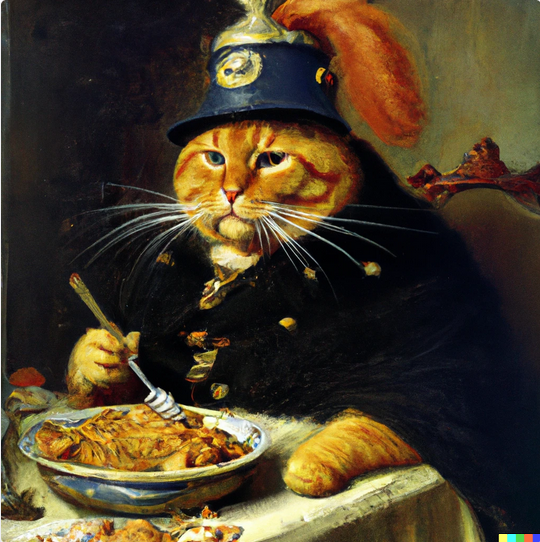 The image you see above was created by DALL-E 2 — a new AI system that can create realistic images and art from a natural language description. In just the past year, AI systems like DALL-E 2, Midjourney, and Stable Diffusion have absolutely exploded in sophistication and popularity among (artistically) talentless nerds such as myself. This kind of tech allows anyone to generate pretty much any kind of image — a realistic 4k photo, a surrealist painting, a corporate logo — without having any actual artistic experience.

Naturally, as with any sort of advancement in technological tools, there has also been quite the backlash with harsh criticism directed towards the creators of this kind of software — and, for once, it’s not without good reason.

It all goes back to how exactly AI art is generated in the first place. These systems are not modern day DaVincis that are intrinsically more creative than humans. Rather, without going into technical details, they are machine learning systems that use data from actual artists to train their models. Essentially, the software takes a bunch of actual art, throws it into a shredder, and when given a textual prompt, reconstructs the shredded data into an image that resembles the prompt it was given. Here is a much more technical explanation, but that’s a good enough explanation for the purpose of this post.

Given that explanation, it’s easy to imagine why the actual artists are so upset about this. Not only do the AI models “steal” their artwork, they give the average doofus the capability to produce artwork in the artist’s own style. A prime example is Greg Rutkowski, who has become sort of a living meme in the AI art community.

Here is the artist responding to a flood of users making art in his own style: As if that wasn’t enough, some guy won an art competition a couple months ago by submitting this AI-generated piece of art: Pretty impressive right? But it was all done by a robot.

So yeah, artists are understandably pissed. But when aren’t they?

Here’s the truth of the matter: creativity isn’t a whole lot more than just stealing different ideas and combining them into something unique. Picasso famously said, “Good artists copy, great artists steal.” It just so happens that AI is already better at stealing than humans are simply because it can look at millions of things at once and apply them to one entity if needed. So, for me, the argument that AI steals artwork and is therefore illegitimate isn’t a very good one. Though, to be fair, you probably shouldn’t submit AI art to a human competition. That’s just rude.

That being said — no, I don’t think that AI will replace human artists. Instead, I think it will become an extremely important and useful tool for those who don’t want to spend years studying art just so they can make a cool painting for their DnD group. And of course, there are and will be many more uses beyond goofy stuff like DnD. In that way, it’s similar to tools like photoshop and digital art — both of which were also criticized when they were first popularized, because “real” artists don’t use computers to help them make art.

At this point, especially if you’re an artist, you might be saying something along the lines of, “Okay nerd, you’re only saying this because AI hasn’t come for your own job yet.” To which I would respond, well, that has already happened on a basic level. Github Copilot is an AI that can write basic programs given a prompt or suggestion. And even if that didn’t exist, let me be frank: a significant portion of my job is stealing code from smarter people on the internet and just integrating it into my application in a way that makes sense. I’m 100% sure that there’s already an AI sophisticated enough to do that, but it’s probably privately owned by a mega-corporation. Believe me, I’d be the first slacker to get my hands on that if I could. It’s not competition, it’s a tool.

It’s not just programming or art. It’s everything. I firmly believe that for every cognitive task, there already exists or will be an AI that can help us do it better than we ever could on our own. AI is a way to let the robots do our busy work, as many students have already figured out. Why waste hours on something that a program can do in seconds? Why would you etch a message into a stone and send it through the mail when you could just send a text? New tech can be scary, but it’s something that should understood and embraced, not feared and rejected.

In fact, an AI wrote this entire blog that you just read.

Nah, I’m just kidding. But eventually I won’t be.